Earlier this year, I was in a workshop in Zimbabwe with some community leaders from around the country, where we were discussing, how allowing open access to biodiversity data is linked to biodiversity conservation and poverty reduction.One farmer stepped up to me during the workshop and attempted to describe a certain caterpillar he referred to as a “worm,” that was devastating his maize crop and threatening his livelihood. Before he even finished his story, I knew he was talking about the fall army worm.

I had already seen first-hand on another client’s farm, how the pest moves in masses to consume large amounts of leaves resulting in a ragged appearance to the leaves similar to grasshopper damage. Prior to this, I had also already received over ten other inquiries about the devastating effects of the fall army worm on crops.

The Fall armyworm (FAW) scientifically known as Spodoptera frugiperda originated from South and North America and has been rapidly spreading and devastating the maize crops across the Sahara Africa since 2015 and caused damage of over 28000 hectares of maize across the continent in that year.  In March 2018, the chronicle reported that Zimbabwe lost almost 150 000 hectares out of around nine hundred thousand hectares grown around the whole country due to the fall army worm invasion. This is almost a 15% of the total national maize crop that was destroyed by this pest. 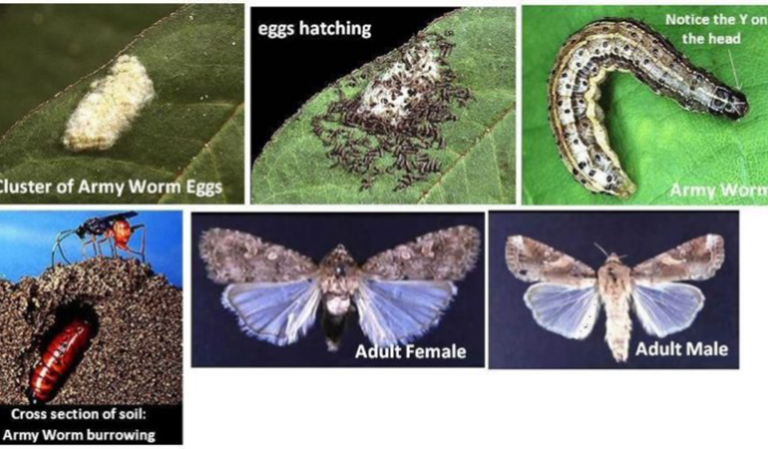 Stages of the FAW

Now that we are fast approaching the next maize farming season in Zimbabwe, I know many farmers will be, seeking for solutions to this problem as they did before. Farmers would be encouraged to start right from regular pest scouting before the outbreaks occur. This is because the fall army worm (FAW) can be most effectively controlled while the larvae are small, therefore early detection of this pest and proper timing of an insecticide application are most critical.

The larger larvae are usually found deep in the whorl of the leaves (the single point where the leaves and
the maize cob wrap around the stem). As part of their pest management strategies, maize growers should pay close attention to late planted fields or fields with a history of these infestation. Scouting for the presence of the FAW in the field at all stages of its life cycle and monitoring the threshold levels for the pest will allow for a more effective control strategy. Detecting an infestation after it is too late to obtain good control is a serious and common problem.

Countries such as South Africa use a host resistant variant of maize known as BT-maize that has been produced through genetic engineering technology and has been genetically altered to express one or more proteins from the bacterium Bacillus thuringiensis (BT). However, some studies done (Prasanna et al. 2018) suggest that Bt resistance alleles may not be present in the FAW population currently in Africa. This needs to be confirmed with further research.

Nonetheless and despite experiencing a similar Fall armyworm invasion to Zimbabwe during the last farming season, South African farmers experienced a bumper-harvest where 85% of this BT maize is grown compared to the other varieties.BT products are very selective to the lepidoptera group of insects (to which the FAW belongs) and have been reported to have limited effects on most non-target insects. Farmers have used BT as an organic pesticide for decades since 1920 and has been sold under various trade names such as DiPel and Thuricide.  They have also been found to be safe for use in the environment and with no human health hazards found to date.

Unfortunately, Genetic engineering, the technology used produce BT maize, remains highly contested territory in many African countries, including Zimbabwe. Therefore, the use of BT maize is one option that has not yet become available in the Integrated Pest Management (IPM) toolkit for farmers in Zimbabwe. Regardless, it is important for farmers to implement all available IPM strategies which employ a variety of integrated approaches including host plant resistance (native and/or transgenic), biological control, cultural control, and safer pesticides, to protect the crop from economic injury while minimizing negative impacts on people, animals, and the environment.